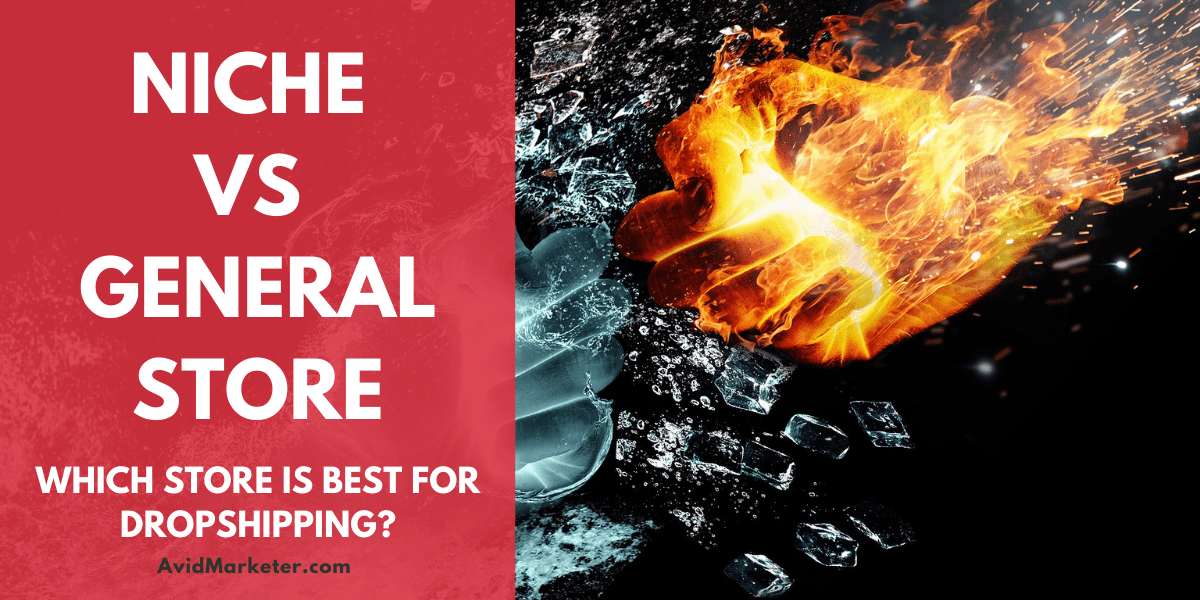 A question that gets asked a lot on Facebook, or sites like Quora is 'should I start dropshipping with a niche store, or a general store?', or even 'what's better to start DropShipping with, niche vs general store?'.

So today it's time to look at both of them, and see if there is a better option to take, and what it really means by niche or general store.

The majority of newbies will start a general store, because every guru under the sun has told them to do it. - There is a small amount of biased in this article. Be warned!

What Is A General Store?

To be honest, it is really very much what it sounds like.

They are DropShipping stores that can span across multiple niches, and don't necessarily follow a particular pattern.

A lot of general stores will look a little bit like a badly done Walmart, or even a non-categorised Amazon, though that is slightly unfair. The stores are usually a large bundle of a variety of items, designed to allow someone to hit a wide audience.

They will usually have quite a generic name for their store, and most likely wont be trying to create a brand.

For example, they will be called 99Store or BotiqueAmi or similar other generic names.

The names don't hint that you will find anything particular on the store, and will more than likely contain a random selection of products.

Pros for a general store

There is obviously a number of reasons why gurus or at least teachers tell their students to go for general stores, and some of those reasons do make sense, but it also hints at some of these gurus not really understanding how to sit down and plan out  a business.

Anyway, onto the pros for opening your own General Store

It doesn't require you to throw all your eggs in one basket.

You can essentially throw up a huge variety of products, testing them with different adverts, and trying to find one that sticks with your audience. A bit like throwing out a fishing net, and basically keeping whatever swims into your net.

You Are Not Tied To A Niche

As it states, you are not locked into any particularly niche, a bit like the first point, it means you can mix makeup brushes with kitchen tools.

They can all sit along side each other, without much consistency or without the need for them to fit together.

You Can Run Lots Of Different Adverts

Can you see a theme here?

General Stores allow you to run lots of different adverts towards your huge array of items and potential winners.

You can try run this method against the huge different number of items method, basically hitting your potential audience with a wave of items, adverts and potential winners.

Cons For A General Store

So we have looked at some of the good points of running a general store, but unfortunately there are also a few downsides, so lets check them out.

Yes, the same thing that made sites amazing, also makes them a complete nightmare to try and navigate around.

Have you ever tried to see what else a store may have and then got completely lost, because none of the items you find are at all related.

Do keep in mind, this is not the same for every general store, a lot of them do get this right, but the huge majority of new sites, and even some that seemingly do well, do not get it right.

Harder To Do Cross Sells Or Up-sells

This actually follows on from the unstructured sites, and one that massively hurts profitability of DropShipping sites.

To help increase cart value or ways to decrease cart abandonment is to offer your buyers items that compliment the original product someone is buying. For example, selling a bike helmet, and then offering the customer a cross sell of bike lights (potentially for a reduce price) or offering them a better bike helmet with lights (for a slightly higher price) can help customers feeling like they are unlocking better details.

With a general store, that is more difficult, especially if you don't sell items that are related.

This is one that still needs to be confirmed, especially as Facebook likes to be a little secretive with how pixels work and how it helps build up data, but one that has been noted with a few DropShippers, is that pixels and ads can take longer to optimise, due to the constant changing of audiences, interests and even demographics.

With a single niche site, the audience (including interests and demographics) will be broadly the same, this cannot be said for general stores, especially when you are testing out different products and adverts.

You will spend 5 days doing the $5 a day on a product, to then decide it's not the 'one', you will then switch over to a completely new product with a new audience, running the same $5 a day method, but now with a pixel that has information for that first audience.

A few gurus, such as Franklin (or ecom elites fame) do actually encourage people to branch out a little and go for niches, with the correct training and understanding.

What Is A Niche Store?

Generally, a niche store is a store that follows or sells items that relate to each other. For example a store that only sells kitchen devices, or phone accessories.

There is usually something that ties the items they are selling together. It can range from hobbies such as rock climbing, to products that help fix the same problem such as iPhone cases.

The domain names will more than likely follow a theme, such as KitchenGadgetsForYou or AmazingBikeStore, or they will follow a particular branding decision, such as FrankBabyStore.

Niche stores, are more difficult to get right, and do take a lot more planning, this is no secret, and it's one of the reasons why many gurus don't like to tell their students to go down this route, but when done correctly, with the correct training and proper planning, they can be very good stores.

The obvious opposite to the General stores (Again, I will admit this is not always the case), but the majority of niche stores will follow some kind of structure, because the items you find can fit nicely into categories.

Taking the bike store example above, you can see that the owner is selling bike accessories, bike tools and even bike clothing. Three very distinct, easy to bundle together categories.

Easy To Try And Cross-sell or Up-sell

If you store is filled with items that are quite similar, or compliment each other, then having a niche store makes this a lot easier.

Using the example we did earlier for the General store. If I have a bike shop selling bike helmets, I can try and upsell customers to a nicer, more expensive helmet that instantly increase the cart value.

Or, you can try and sell items that compliment the original item, such as selling water bottles with bottle holders, or bike lights with high visibility clothing.

So, take this part with a sprinkle of salt, it's so far unproven and as I have said before, Facebook rarely like to deny or acknowledge certain questions, but others have pointed out similar, and it does stand to reason to at least make sense, and be true.

When running adverts, if you use the same audience, interests and even demographics, you are more likely to become optimised quicker, if you don't keep changing those metrics.

Changing the items may muddy the puddle, as Facebook has to go out again and find people that need bike lights rather than helmets, but it goes without saying that that is going to be easier when it has data already about similar people.  You have more similarities between someone buying a bike helmet and bike lights, than you do with someone buying a neon globe and a spoke cleaner.  Unless you are me, I have both.

The Cons To Running A Niche Store

It's not all rainbows and sprinkles sadly, there are some down sides to both starting out, and running a niche store.

You Are Tied Into Niches

A lot of the time, to get the niche store, you need to fully buy into the mentality, that means purchasing domains with niche sounding names, potentially investing in logos, names and even social media accounts.

If the niche or idea doesn't work, it's a lot harder to switch everything to the new idea. Unlike the general stores which can be switched quite easily once a winning niche or item is found.

If You Fail, It's Harder To Switch

Directly associated with the point before, is that if things don't work out, you are going to have to do some major switching and overhauling to find a new niche, or switching over to a general store.

How To Solve Some Of The Issues

One of the main ways to solve these issues, is to properly plan your store. Don't treat DropShipping like some kind of half arsed side hustle.

DropShipping is a real business, and should be viewed as one. That means you should spend the time researching, investigating and planning your store. Don't just jump into a new store and do all your testing and finding out what products work and don't work.

Follow someone's advice, such as Franklin and properly plan out your store from start to scratch. If you need to do testing, do it for the niche you have chosen, or at least the broad niche. For example, you might choose to do cycling, as the broad niche, test products to then see if you want to narrow down into road bikes, mountain biking or maybe children's bikes.

Do not be afraid to take your time setting your store up, just because someone has said you can create a store in 5 minutes, it does not mean you should. I have taken weeks to create stores, because I have sat down and worked out every time I want, looking at the total volume of sales the market size, how many other stores I could find as competitors and as many other metrics that I could find.

Finally, enjoy yourself, you are doing this to try and make a living online, so that you don't have to drive to the office each morning, so try to remember that.