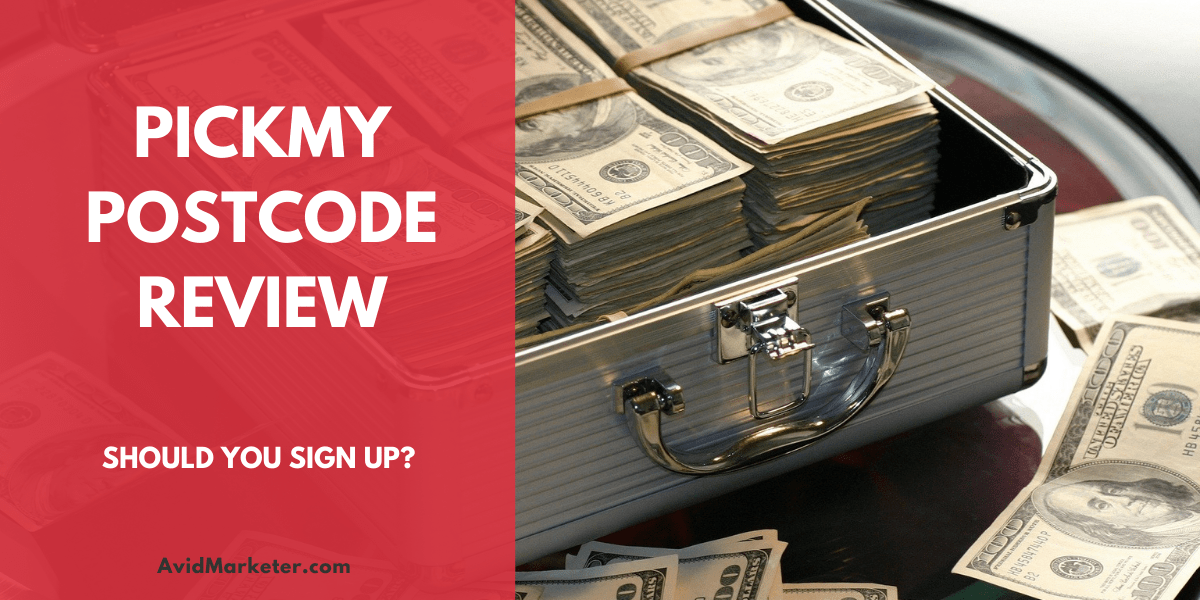 So a few people have messaged me on both here and via Facebook asking about one of the websites that I mentioned in my 12 Ways to Make Money at Uni and that was the Free Postcode Lottery, which has now changed to PickMyPostcode.

Due to the rename, I decided to update this article and give a new PickMyPostcode Review.

In a nutshell, it's a free online lottery that uses your postcode as it's 'ticket'.

The website has 6 different draws each day, including the Main draw, Survey Draw, Video Draw, Stack pot, The Bonus Draw and a small quick fire draw after 6 pm. They also do flash wins, whereby they swap one of the adverts that you see on the website for an instance £5 win.

How Does it work?

The whole of the PickMyPostcode is funded by the adverts and bonuses that you see around the site. So they have teamed up with Quidco to offer bonuses, and different services, in return they get a commission (if you sign up via their affiliate links - Much the same way as this site is funded).

They have also teamed up with other companies to provide extras or products that their customers may find useful, such as Tv Streaming Services, surveys, snackboxes etc the list really does go on forever.

They also make money through the adverts that you will see on the website and a little extra for each advert that is clicked. I believe the survey draw also provides them with a small amount of commission for every person who fills in one of the surveys.

How Do You Win With PickMyPostcode

Each day, every postcode is added to a draw, in turn, the random number generator then picks one of those posts codes and display it for that particular draw.

This is the same for all the draws that they do on the site. This means that you have an equal chance of winning every single day and that no one has a better or worse chance than someone else.

The amount won is shown clearly for each draw, and will also show the number of potential winners.

There are slightly different rules depending on the draw.

The standard amount of  to be won is £500 (amounts can increase when postcodes are not claimed). But the winning is shared across the number of people within that postcode.

If TR16 1PE was drawn and it had 5 people who had signed up with that postcode then each person would be awarded £100. 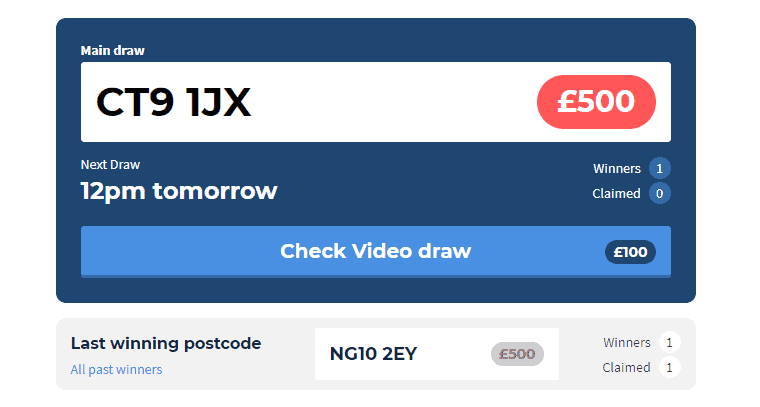 For the survey draw, again using the same postcode and the same number of winners, each person would get a share of the standard £50 prize (again the prize can increase if the postcodes are not claimed), so £10 each.

Surveys do not always appear for this draw, and sometimes you will be shown the winning survey instantly. If you do manage to grab a survey and become eligible to partake, you are given a 20p bonus.

The video draw again works much the same way as the other two, this time offering a standard £100 per win, each person would win £20.

You will have to watch a short video for the winning postcode to appear.

This draw is actually different from the others, it has two draws per (9AM & 9PM) day and it's first come, first serve. So if you see your postcode appear, you want to click the big claim button as quickly as possible!

For this draw, you will be awarded £10 if you manage to grab it.

Every time a draw occurs, 5 new postcodes are added, so on some days you can actually see 15 - 20 potential winners! I would read their own guide on this.

Now, the bonus draw is a special draw and is there as an incentive. Every time you check the other draws you are given a 1p bonus.  So if you view all the other draws for 5 days, you will be awarded 20p. Over time this bonus builds up, as well as getting an extra 20p per survey you complete.

Once you have reached the threshold, either £5, £10, £20 you will be eligible to claim the prize if your postcode is selected (again you share your prize with other winners).

You can also boost your bonus total by 1 of 2 ways. Either you take part in the bonus offers that appear on the page, so there may be an offer for some free coffee - The offer will give you a £4 bonus, and it's worth £11 to you as well!

They recently updated the bonus draws, and no longer offer cash back from companies such as Quidco (you can still grab £5 cash back with this link though). Or alternatively, you can sign up to TopCashBack and get £10 cashback + then sign up to Quidco through PickMyPostcode and you might be able to grab yourself a bonus inside the bonus builder. 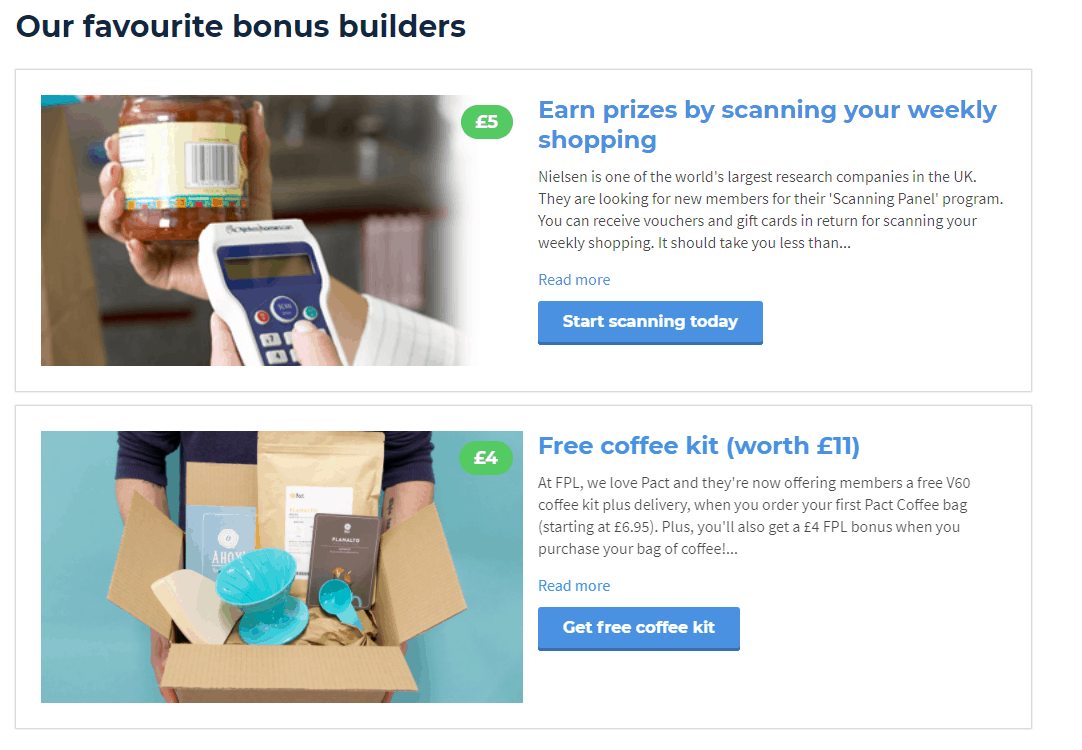 The other way of building your bonus is by referring new users who sign up, for each person who signs up via your own link will generate you 1p instantly, and then another 20p over time as they build their own bonuses up! You can share your link on social media, via email or add it into links on your own blog!

Thanks to the wonderful people who read this PickMyPostcode review, I actually managed to win £100 as I was in the draw for referrals.

Finally, you also have the Flash Draw, which is a £5 draw that can happen to anyone, at any time and will appear in one of the adverts around the site (on any page) and then the mini draw, which will appear between 6pm - 12pm at the bottom of the site.

This mini draw is again first come, first serve, so you want to make sure you are quick!

What Is The PickMyPostcode Bonus?

So the bonuses are there as an incentive to come back each day or sign up to the sites offers and are there as a thank you for taking part in the website. The bonus itself cannot be withdrawn and is added to your winnings from the draws on the site.

Should I Bother With PickMyPostcode?

To be honest, I quite enjoy the thrill of wondering if my particular postcode has appeared. It takes very little time to check (though it can be slow sometimes to load the draws), I don't have to hand over any personal details, other than an email. Others have argued that the chances of winning any of the PickMyPostcode draws are quite low, but so is paying £2.50 to try and win the Euro Millions..so hey.
So that's it, that should answer your question and you should now know what PickMyPostcode site  is! If you are still sceptical, I would suggest giving Trustpilot a visit, as they have tons of reviews about PickMyPostcode

Why not sign up today and you never know, you might have a cheeky win yourself! Be sure to let them know I sent you if you do!